If you want your video games to look alluring and incredible, ray tracing testing will help you out with that. If you are a regular player of video games or have ever watched any of Disney’s animated movies from the last years, you may have already experienced ray tracing without realizing it. There has been a significant buzz created in the gaming industry because of this term. From the past few years, ray tracing is often considered the future of graphics in gaming. So, let us find out What is Ray tracing and What is it’s working?

What Is Ray Tracing?

Ray tracing is a method to render graphics using algorithms in order to find out where light and shadows should appear in video games. You must have learned about light and its mechanism in elementary school science. When you look at a mug, the light reflects your eyes after striking the surface of the mug. Your brain interprets the message that the object present in front of you is a mug. Now, move your eyes and find the light source in your space. This entire procedure is called Ray tracing.

These days the 3D video games in the market use ray tracing algorithms. The main purpose is to consider the player’s point of view and trace or identify the source of light, colors, and shadows of various objects on the screen. The graphics produced due to ray tracing are more defined and smoother around the edges and look more realistic. 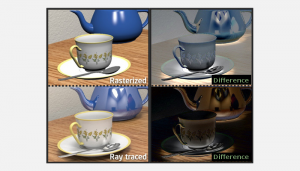 If you’re curious and want to know what the images would have been looked like before Ray Tracing’s existence, you can have a look at the video games that were made in the early 2000s. Compare those games with the latest video games or the games with AAA titles present in the market these days.

Rasterization is a method that is used by traditional computer graphics. It involves the restoration of the concept of 3D light sources onto a 2D surface. There occurs a translation of 3D polygons into 2D pixels, and this is not an efficient method and has no particular results.  Moreover, traditional computers’ speed was not good enough to cope with the video games’ intensity. Although there have been many updates in rasterization, they were enough to manage the graphics thing. 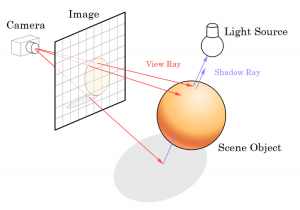 When we think about ray tracing, it seems an easy and simple process. But to be frank, it’s not an easy task. Let us have a look at the working of ray tracing. A process called “denoising” is performed by Ray tracing. This involves algorithms. Starting from the camera, the person’s viewpoint, traces, and important points, and the most crucial thing are the shades of light and shadows.

Ray tracing uses a machine learning technique in order to fill the gaps and make the photo look realistic. If you don’t already know how to identify if the graphics quality of a video game is good or not, we have come up with the answer to this question. If the scene in your video game appears brighter and sharper, the quality of graphics is amazing. It means that the higher the brightness, the higher the quality of graphics. One more thing that should be kept in mind here is that the price increases with graphics quality. This is probably one of the reasons for the late emergence of ray tracing in the market.

What took so long for Ray Tracing to Flourish?

You would be surprised to know that Ray tracing is not a new technique. It has been used by Hollywood long before its use in video games. Monsters University, released in 2013, was actually the first movie in which Ray tracing could be seen. All the lighting, shading, and graphics in the movie were made using the ray-tracing technique. If ray tracing has been present out there for many years, you must be wondering what took it so long to reach the video game industry.

Considering the mechanics first, Ray tracing is very demanding. For example, if you want to apply the ray-tracing technique on a 90-minute action film that contains 24 frames a second, the process will be very time-consuming. Only one scene can take up to several weeks. So, you can imagine the time it could take when applied to a standard video game. Moreover, a video game with almost 60 frames per second involved it, making it almost impractical to use ray tracing in video games.

In addition to this, ray tracing is expensive too. The expensive and costly budget of Ray tracing inhibited its use in the video game industry. Let’s come to figures, Monsters University by Pixar used $200 million in its making. The modern graphic cards that support ray tracing have a budget ranging from $400 to $3000.

When Ray Tracing Is Used

Ray tracing is used almost everywhere in a video game, but its use gets important in cut scenes. Have you ever noticed your character looking more realistic and sophisticated during video game’ cut scenes? It’s because of ray tracing. AAA titled Control that was released in 2019, is one of Ray tracing’s best examples in a video game.

In addition to its use in video games, ray tracing has applications in several other industries. From architecture to engineering, the use of ray-tracing can be seen in numerous fields. In architecture, the 3D modeling of a building is done successfully with the help of Ray tracing. The imagination of the architect gets more realistic while using ray tracing than any other hand-drawn sketch. Moreover, the modeling light is accurately embedded in ray tracing. Similarly, ray tracing has various uses in the field of engineering.

Ray Tracing is doing its best in shaping the future of the graphics industry. It promises its users a visually pleasing experience that will add to their pleasure. You are now aware of what is ray tracing, and how does it work. Make sure to use this technique and enjoy amazing visuals.

What Is SSH? All you need to know!